Yeti has successfully performed a KSK roll in 2016. During the first KSK rollover, it was discovered that a view added to a BIND 9 resolver did not use the same RFC 5011 timings as other views, including the default view. An administrator may expect that a BIND 9 resolver will handle RFC 5011 KSK rollover for all zones identically. The newly added views will fail to resolve when the KSK roll happens.It was documented in a posts in Yeti blog.

In order to add more information to the earlier roll, we performed another KSK roll before the ICANN KSK roll begins (2017-10-11). We used similar phases to the IANA roll, although with different timings so that we can finish the roll faster. Our “slots” will be 10 days long, and look like this:

In the design of Multi-ZSK, each Yeti DM used their own ZSK to sign the zone. That is to say at least 3 ZSKs are in the DNSKEY RRset, or more than 3 ZSKs (up to 6) due to ZSK rollover which may cause some overlap. Take the KSK rollover into consideration, it is possible that there are 8 keys (6 ZSK and 2 KSK) in DNSKEY RRset which will produce a very large response to the DNSEKY query with DO bit set. It is cool for yeti experiment looking for impacts of large DNS response.

Like we did in the first KSK roll, monitoring was set up on Yeti validating resolvers to capture validation failures. Besides DNSSEC validation, fragmentation and packet loss due to large DNS response are in question which Yeti was started to investigate. We set up RIPE Atlas measurements which are able to spot failures like timeout for DNSKEY queries via UDP.

For each Yeti server, a measurement was setup which ask for 100 IPv6-enabled probes from 5 regions, every 2 hours sending DNS query for DNSKEY via UDP with DO bit set.

The measurement API compatible specification is as follows:

Note although each measurements ask for 100 IPv6 enabled probes to do the job, there are may lack of qualified probes in some regions. In most of case there are around 66 probes allocated for each measurement, which is acceptable for this experiment.

Before the analysis is proceeded, some observation were made to filter bad samples and result.

Although it is possible that there are 8 keys (6 ZSK and 2 KSK) in DNSKEY RRset and many possible combinations, during KSK rollover experiment we actually observed 4 cases:

For every tome slot(2 hours) around 66 probes sent queries to Yeti root servers. We counted the number of failures and number of total queries which are categorized according to the packets size. The statistic is shown as following table.

In ICANN’s KSK rollover plan, the packet size will exceed 1280 Octets limit up to 1414 octets on 2017-Sept-19 and 1424 octets on 2018-Jan-11. It means around 2% IPv6 resolvers(or IPv6 DNSKEY queries with DO bit set) will experience timeout. One study shows that 17% of resolvers cannot ask a query in TCP. So probably in extreme case there are 0.34% of all resolvers around the world will fail to validate the answers. 0.34% of millions, It is not a trivial number. 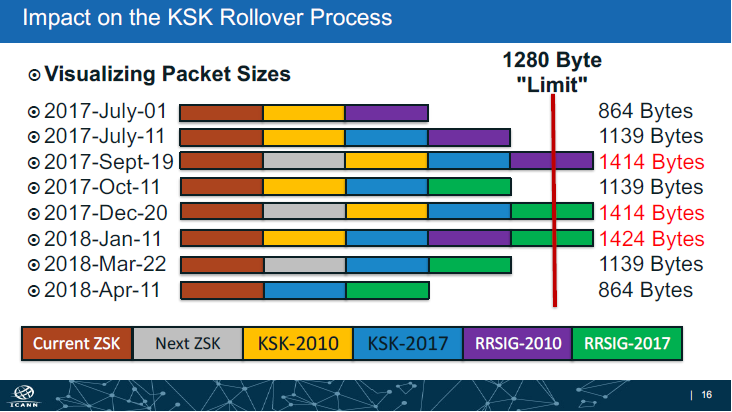 It should also be noted that during the KSK rollover and other experience in Yeti testbed, no error report was spotted directly due to packet size problem. So it should be further observed and evaluated on the impact of large packets issue.

The monitoring result shows that statistically large packets will trigger higher failure rate (up to 7%) due to IPv6 fragmentation issues, which accordingly increase probability of retries and TCP fallback. Even within 1500 bytes, when response size reaches 1414 bytes, the failure rate reaches around 2%. Note that ICANN KSK rollover will produce packets exceeding 1414 Bytes.

To avoid less than 10% anomaly inside DNS transaction, asking for TCP support seems a light-weighted solution currently. If you want to avoid TCP fallback, you can hold a certain size as a boundary for response, like 512-octets was hold for a long time in DNS specification. In IPv6 era, a new boundary 1220 octets (for IPv6 TCP MSS value) was proposed in APNIC blog posts. I would like to ask is it worthwhile to take any heavier measures to this issue? Does it sound like a plan to use stateful connection in the first place to transmit DNS like TCP or HTTP for queries causing large response, or fragment the packets in the DNS layer?